In Title Studio, I am not seeing a complete list of the fonts I have installed on my Win10 system. Is there a way to select additional fonts to show up in the dropdown list?
Denny

With Title Studio in BCC 2020 & 2020.5, I was using the Lavoir font (a basic W10 font) for a project. But after installing BCC 2021, Title Studio no longer recognises Lavoir and I had to change the font to another that it did display, something I really didn’t want to do because Lavoir suited the project more than its replacement.

I’m not aware of anything that we did that would have caused Title Studio to stop reading a font that it had no trouble reading in prior versions on the same system. Have you tried the standalone version of Title Studio, and if so, are you seeing a similar result there?

I think you’re responding to someone else here. Sorry.

Lavoir: Typographic work and development based on an old Art-Déco public bath sign in Lyon (France). From the few letters there I drew the entire font, adding ligatures, regular and old style figures as well as a small caps version. At the time I...

@dave3 when you joined the forum you apparently checked the box for email updates. You’ll probably want to go into your prefs and change that.

Have you tried the standalone version of Title Studio, and if so, are you seeing a similar result there?

I just tried the SAL - the same thing there as well.

But michaelh raised a good point, so I checked C:\Windows/Fonts and opened Lavoir - it is listed in the header as being 'OpenType Layout, PostScript OutLines". But on locating a couple of other fonts that also aren’t appearing in Title Studio, I noticed that those fonts are also listed as being PostScript Outlines. The fonts that do in appear in Title Studio are TrueType from what I sampled. So I think that michaelh has identified the cause.

So our engineers looked into this and have discovered that the font that you mention is not a TrueType (.ttf) font, and that it does not appear to contain any outlines so Title Studio cannot use it. I doubt very much that this ever worked with Title Studio but if it did sometime in the past then MS must have changed something on the system.

One of our QA techs has a potential solution though, which you can use at your own risk. The solution is to use one of the free type convertor kits to convert this font into a TrueType font that TitieStudio can actually use. Try searching for otf-ttf font convertors.

Thank you, Peter, for checking this out and explaining the situation. I’ll now know for future reference.

Thanks so much for finding the issue here, and also supplying a potential resolution. What is the risk you mentioned. Could it make the non TTF fonts unusable after the conversion?

I’m glad we were able to discover the root cause of the problem and offer this solution. We do not believe that anything will happen if you convert the font but we cannot be certain because we have not thoroughly tested that.

The font that you want to use is a MS system font and we were concerned that the system might react negatively if we were to modify it. That said, you could always duplicate that font, convert it to TrueType and then use that converted font in Title Studio.

I watched one of Boris FX videos which utilized the BN Element font from Dafont.com

After installation of the font, Title Studio does not recognize the font. However it is visible to Vegas Pro 17

What is required to access the font from title studio?

The issue is that TS will only accept TrueType Fonts

Hi, I’m a bit late to the party but i too just downloaded a couple of fonts from DaFont , after extracting them from their zipped folders in the past i’ve just directed whatever program to that folder or it’s found them itself but i couldn’t find my new fonts in Title Studio, read what you’ve wrote about TrueType fonts, that’s what my new ones are, i deleted my folder in Font Styles & created another so that Title Studio would search the system again but they still weren’t there ?, i had DaFonts page open & noticed it says “right click on the file & Install”, there’s no right click install on my PC? but i did find at the top of the explorer window a little purple button that (Open) opens a window to install

Both new fonts are now in every program i have & show in the list on the PC’s System page, but… only one shows in Title Studio

I’m now going through all my font files & installing them, we’ll see what pops up in Studio,

Hi, Peter, after going through install thing on my PC & now looking back at your comment, yep Chocolate Covered Raindrops is the one that shows in Title Studio but not Kiss Boom which doesn’t have TrueType Outlines

It does have PostScript outlines whatever they are 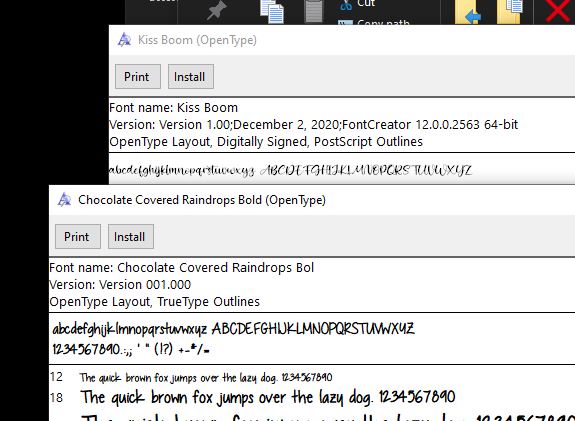