What happened to the Cast Shadow option that appeared in the drop shadow text properties?
Denny

That option is still there - you can find it under the shadow pop-up menu, but you must first enable the shadow option. I’ve attached a screenshot that shows you where to find it. 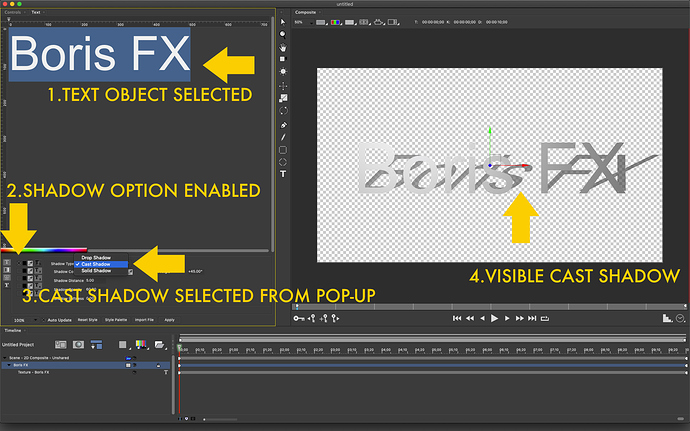 Thanks Peter, got it. One more question. I find that if I put a material face on the text, the drop shadow disappears from the text box where the 4 vertical buttons are. Is it not possible to put a cast shadow on text with a material face?
Denny

Hey Denny. Glad that worked for you. So within Title Studio, 3D text is different than 2D text in that the 2D styles do not translate to 3D. In fact, if you’re generating 3D text you should disable the 2D shadow. There’s a dedicated 3D cast shadow shader that you need to use. I’m not in the office at the moment but I’ll try to find a tutorial that I can send you for this. Cheers, Peter.

So in Continuum Title Studio, there are completely independant procedures for adding a cast shadow to 2D text as opposed to 3D text. With 2D text, the cast shadow is a style which is controlled via the text generator window. WIth 3D text, the cast shadow is generated via 3d lights, which are positioned in the scene to create real 3d cast shadows. Shadow Lights are set up at the Scene Container level - with the scene container selected, just click on the lights tabb, enable light 2 and set the light to shadow then position the light to generate the shadow that you need.

I hope this helps.

Hi Peter
Whenever I select “Apply to Title matte” within BCC Cast Shadow it does not isolate the title (same for Reflection.) I’ve followed tutorials as well. I’ve tried adjusting it after that but to no avail. I have recently upgraded MC to 2020.4. Maybe that has something to do with it? MAC High SIerrra
Thanks
Magnus

To what are you applying Cast Shadow? Can you describe the exact setup in detail? I believe Avid’s latest native titling does not support passing alpha channels to subsequent effects so that might explain things. Does it work if you use Title Studio to generate the title instead? (When stacking Continuum effects with preserved alpha channels in between them, be sure to set the upstream effect’s Background menu to None so the alpha gets passed through to the next effect).

Hi Peter, I have set light #1 to Point and I turned on and set the light #2 to Shadow, but I don’t see any Shadow Cast on the transparent XZ plane of the viewer. I only have extruded text in the viewer. Do I need to actually have another object like an XZ flat plane in order to see a Shadow Cast? I noticed that changing my light #2 between Point or Shadow, seems to have no effect on the my light #2, it just looks like a Point light in both settings. Thanks for any help? 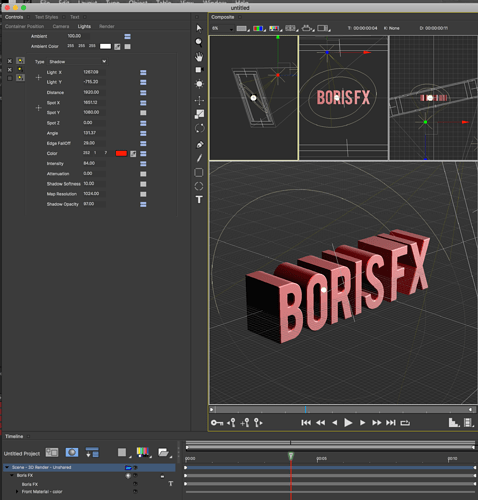 Hi Peter, I’ve added a floor plane, but only getting the red light and no shadow cast. Any thoughts? Also the AE window on the right matches the small top left render window of BCC Title, but the colors are way off and/or blown out, when compared to the top view and large WORLD view window. On a side note, could you please tell me how to rotate the world camera? Thanks for the help! 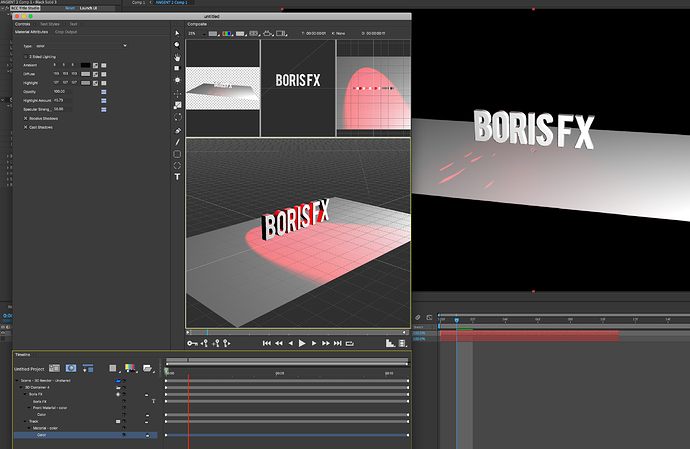 Thanks Peter, I was able to get the shadow cast now, it turned out that the red light just needed to be repositioned. But my new question is how would a get the shadow cast onto a video clip of a street, without seeing the white floor plane showing up? Thanks again!

I’ve attached a Title Studio project for you to review. In this project, you’ll see that with the way that I’ve positioned the light relative to the text object and the ground plane, the shadow light is casting a shadow onto the ground plane. Also notice that in the World view, we can’t see the shadow, which is a limitation of the World view cam. Cast shadows are only visible in the render camera.

You can rotate the World camera by holding down the Command+Spacebar while dragging in the World viewer.

Thanks Peter. Sorry but what program do I open the .blu file in? Not sure how to load this .blu in BCC Title. Also, how would I composite the cast shadow onto a the flat sidewalk of a street video clip on not just a blank plane, is there a tutorial on that? Thanks!

Ah ok I got it, I did File>Open to load the .blu file in BCC Title, thank you for the sample, it’s perfect! and tried out the rotating function in World Camera. So only question is how would I composite the cast shadow on a video clip using BCC Titler? I’m guessing from what you mentioned about the BCC Cast Shadow plugin, I could use this instead, to composite. But is there I way to do the Cast Shadow composite with the shadow created inside of BCC Titler? Thanks again!

Here’s a link for using the BCC Cast Shadow filter in the host timeline as another way to generate a cast shadow from text : Boris FX | Webinar Replay: Title Like a Pro with Continuum for Avid

Go to about the 41 minute mark to see the bit about the use of cast shadow with title studio in a host timeline.

I would strongly recommend using this approach over the internal cast shadow light in title studio - you’ll find it much easier to product the effect that you’re trying to achieve.

Awesome, I’ll definitely check it out, thanks for all the info!!

I’ve tried BCC Cast Shadow, but I’m not able to get a natural looking shadow. I have BCC Extruded Text which I have tied to the Comp Camera which is positioned so that it looks like the Text gets further away from left to right, and I have BCC Cast Shadow using it’s internal camera, and I want the shadow to look come straight forward (like the default shadow), but no matter what I try it just looks like the Cast Shadow is mirroring the text and not actually casting the shadow correctly unless the cameral is perpendicular to the text. Plus, I’m trying to use the Curl feature turned ON for the text, but the curve of the shadow still doesn’t right, and just looks mirrored. Actually the only time it looks close to correct is when I put the light to cast a shadow towards the back, but I’m wanting to cast the shadow to the front of the text. Any help will be greatly appreciated!! 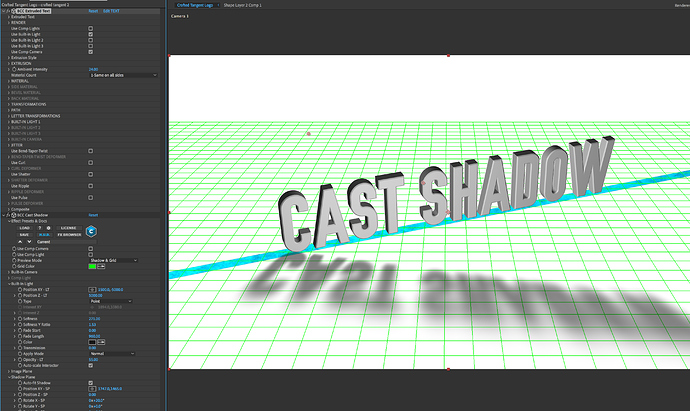 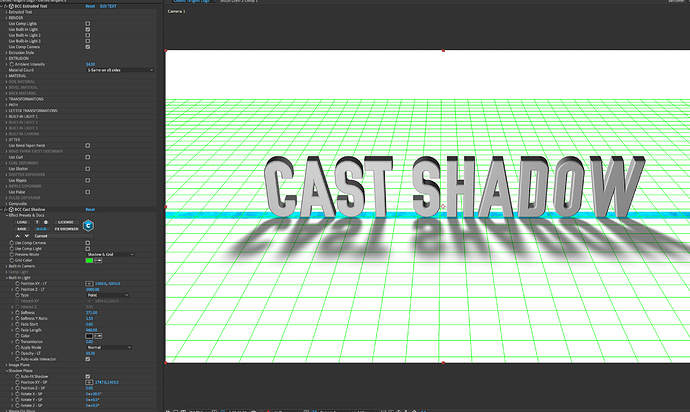 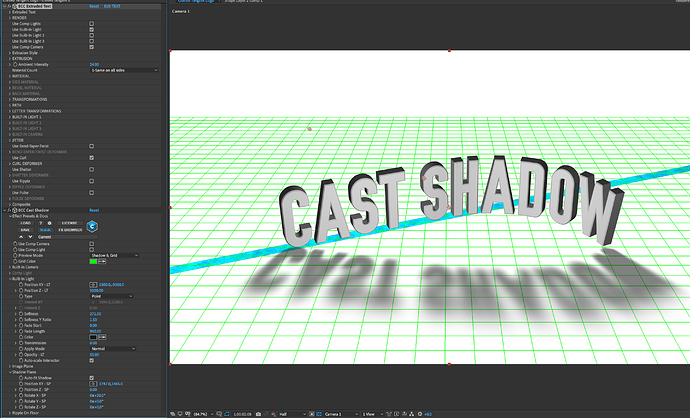 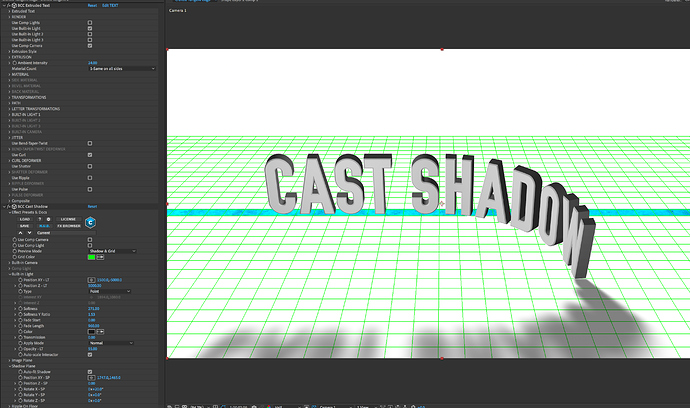 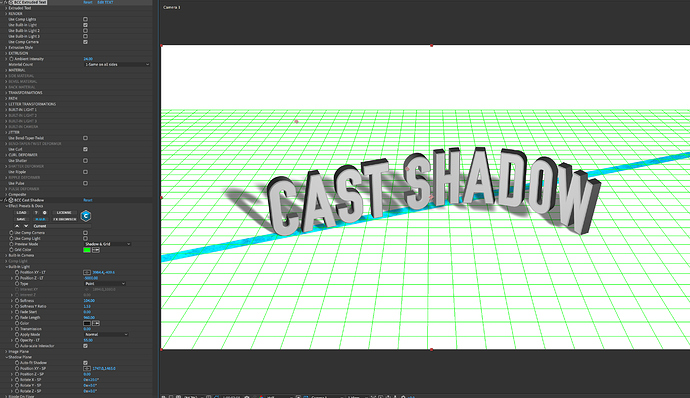 Here’s a link for using the BCC Cast Shadow filter in the host timeline as another way to generate a >cast shadow from text : Boris FX | Webinar Replay: Title Like a Pro with Continuum for Avidemployee monitoring software

Go to about the 41 minute mark to see the bit about the use of cast shadow with title studio in a host >timeline.

I would strongly recommend using this approach over the internal cast shadow light in title studio - >you’ll find it much easier to product the effect that you’re trying to achieve.

Yes, it helps!
Thank you!

This is just a warped/photoshopped image showing how I think the shadow “should” look, with longer shadows at the curved part of the text. Is this achievable in BCC Cast Shadow? Thanks. 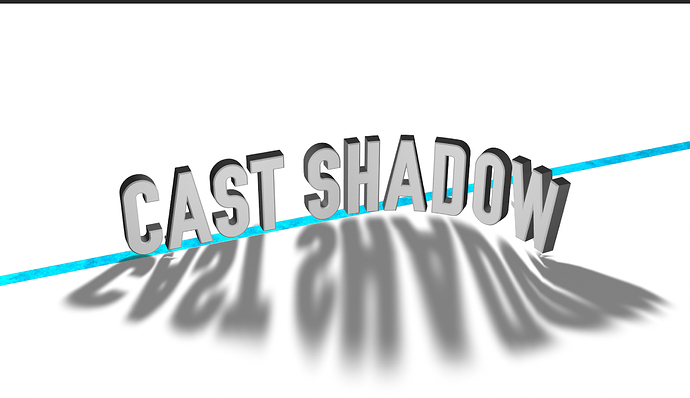