I’ve tried tracking several things in the scene. There’s a podium, that never leaves the scene, nothing cuts in front of it and yet a quarter of the way through the track just pops off the podium and off the screen saying nothing is there when there it is… help please

Hi @revcliff what version of Mocha AE/After effects are you using?

If it is suddenly jumping off the object it’s usually because movement in the scene has blurred the details of the object or it has moved beyond the bounds of the search area parameters in the Track module.

Is there any sudden movement in the shot? Can you show us the point where it fails?

it’s the latest version of AE/Mocha AE… I’m clear about what usually makes it jump off the screen, but none of those are in effect here. It does jump a bit, but not that much and it’s right in the middle of the screen, no where near the edge and nothing close to blocking it. The clips to large (4k) to show here. Are you looking for a screen shot or the actual footage? 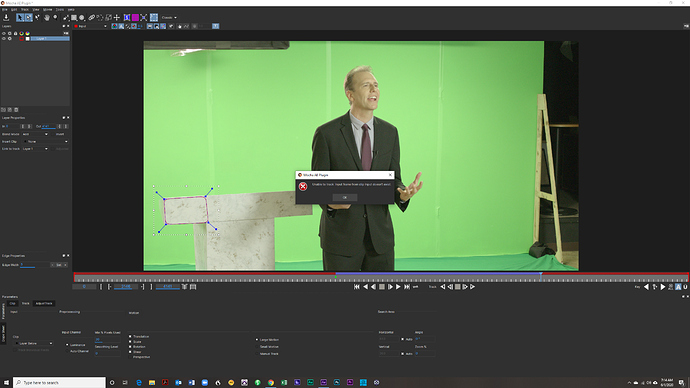 here’s an image… the track was going along fine… no quick movement in the clip and then this!

I’d suggest tracking more of the pulpit. You’ve got a lot of plane there you can use.
Also draw the spline edges outside of the object. It helps track it better.

If the person is getting in the way, just draw a loose mask around the parts that get in the way of your underlying track.

If all else fails and it still jumps, turn off GPU tracking and finish tracking it that way. Depending on your GPU, you can sometimes see some tracking anomalies like this when using the GPU tracking option. You’ll have to go into your Mocha preferences, go to the GPU tab, turn off GPU processing, and then save and close Mocha, save your project, and restart AE.

I’m curious – other than buggy code somewhere, why would use of GPU lead to erroneous tracking?

It’s not buggy code so much as math diversity. How it was explained to me is that every card handles the math differently and some cards skip more “steps” in the equation than others based on a myriad of factors including hardware and drivers. When you are using GPU processing instead of CPU processing the reason it is fast is because it’s doing calculations that are truncated for speed, and this process can vary by card. So basically it’s skipping a step in the math for speed… But if the card is processing it a certain way, and the calculation is off by a very infinitesimal amount, then that small error can be recursive and it becomes a problem. So you can see jumps like this on some cards. My current card is one that I sometimes see this on and it is a beefy Quadro RTX 5000.

CPU skips no steps in the math equation, takes longer, and ironically sometimes GPU tracking can actually be more accurate because it doesn’t look at as much. So sometimes tracking can be finessed by using either option where it is best suited to work.