It’s my first time doing any tracking for about 3 years so have forgotten a lot of things. I want to track footage of a dance performance so I can put text on the wall behind but it’s quite complicated footage: dramatic zooms and perspective changes, lots of moving occluding objects.

I attached a video including the footage and a VoiceOver of me explaining things.

This is a hard one! Is that whole performance over 18 minutes of movement?

You’d be able to get away with simple garbage mattes around the foreground elements and then refine the roto later, but I think the hardest part on the tracking side is going to be the wall itself.
You don’t have a lot of texture in the wall to track so I think there’s probably going to be drift very quickly. The door hinges and edges of the mirror might provide some assistance but as you’ve said, there are a lot of obscured parts where you can’t see those edges.

For the locked shots, the roto on the bar and supports will be straightforward and luckily the arms are fairly rigid in the performance, but the legs and hair will cause some issues. You might be able to do some isolated keys with those areas to help since the hair is dark.

If you have an example clip I can suggest some approaches, but there are a lot of tricky elements here…

Hi @martinb thanks so much for taking the time to reply. It would be a 1 minute compilation taken from a performance that is 4 minutes long in total, the 18 mins comes from the total recording time with breaks in between etc.

Here is an unedited clip, which I would use my favourite bits of in the compilation.

I googled garbage mattes and have a decent idea of what you meant. What did you mean by isolated keys?

Hey, I hope you don’t mind me chiming in!

I believe what Martin mean - you can pull a draft key based on luminance difference, and then use that as an isolation matte. So basically, it serves the same purpose as garbage mattes, but created & used in a slightly different way.

To demonstrate, here’s how I was able to quickly pull the key with the Luma Key in After Effects. Then I set it up as an “Insert Layer” inside Mocha controls, so then It can be used as a Matte Clip. Everything that is shown red - will be ignored while tracking, and shouldn’t affect your track. 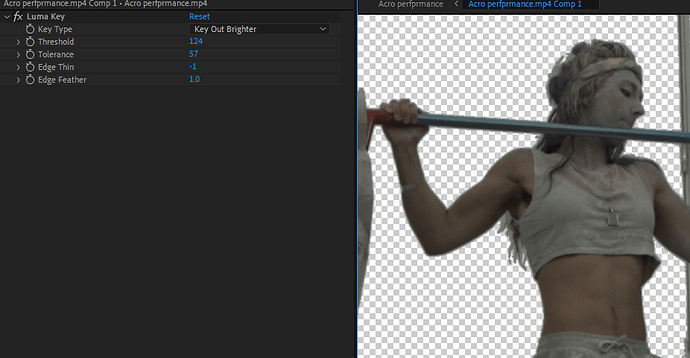 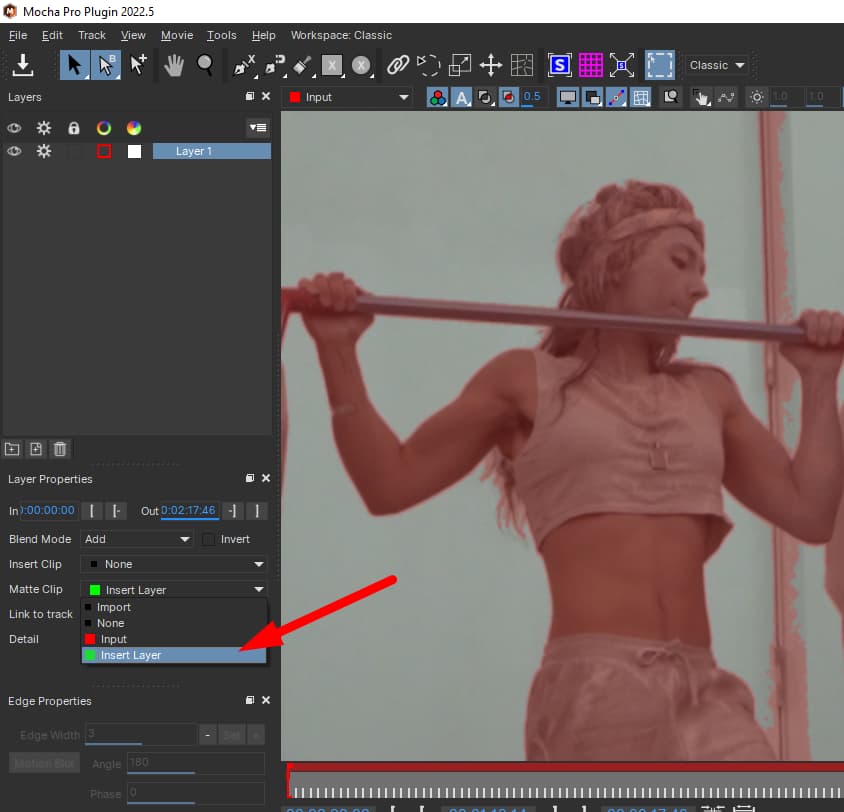 Unfortunately, I must say that this feature is only available in Mocha Pro plugin, and not in Mocha AE

Hey Elizabeth, no not at all!
That is a very clever workaround, but I don’t have the budget for Mocha Pro unfortunately. @martinb or anyone else please let me know if you can think of any other mochaAE workflows. If not its ok I can think of other ways to present the poetry

Is the goal to make it look like it was there all along or just to have the text in the scene matching the camera movement?

Another option would be to track an easier object in the shot and have the text float, but tracked.
The bars may work, but they wobble during the performance which might be distracting.

You can also get a slightly unstable result by flaunting the planar tracking convention and just tracking the whole back area. It won’t be perfect, but you’d be able to adjust the track afterward. Here i’ve made a large matte for the foreground and just tracked everything. 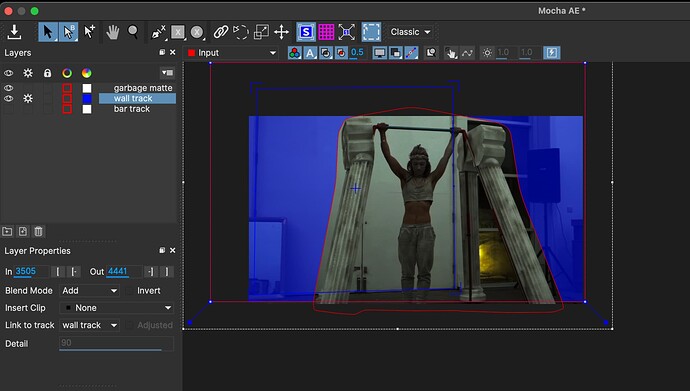 Your other option would be to manually track, which would be time-consuming but possibly doable. TBH the largest amount of work is going to be the rotoscoping.

Hi Martin,
Thank you for putting your mind to this tricky track again. The goal was originally to make it look like it was there all along, but making it just match the camera movement wouldn’t be all too bad either. The audience watching it would not be judging the video for its motion graphics skills.

This new solution sounds like a good idea. I see that you’ve tracked the bar and the wall - which one would the text follow? How do you combine both of these into one bit of tracking data to use? Talk me through it a bit more.

This new solution sounds like a good idea. I see that you’ve tracked the bar and the wall - which one would the text follow? How do you combine both of these into one bit of tracking data to use? Talk me through it a bit more.

Sorry for the delay in reply.

The foreground garbage matte in the above scenario is to mask out the performer so it is ignored by the wall track (blue matte).

The “bar track” layer was just focused on tracking the flat rectangular portions of the bar columns to see if I could get a useful track there. I just turned it off in the screengrab to focus on the background track.

But the main problem will still be when the wall is entirely obscured. You might need to break it down into sections to manage when it is actually trackable or in the shot.

Understood! I understand now more practically what you are describing and almost feel like I can do it myself. What settings differences are there between the different layers? Are they parented in any way? For example how does the software know which one is a track and which one is a mask? Sorry, it’s just been so long since I’ve used Mocha AE!
I once did a brief video call with one of the members with your team when I was struggling with something, I wonder if that option is available. Or please direct me to any video tutorials with similar workflows/intended outcomes. In the meantime I will attempt it myself

I recently did a tutorial that cover tracking techniques for occlusion and distractions. It covers the very basics at the beginning, then shows one more complex example at the end. Maybe you could watch it to refresh your memory!

How does the software identify which one is a track and which one is a mask?
Well, that’s simple! By default, the layer is both at the same time! Unless you manually parent the layer to another one. Here’s how the setting looks inside Mocha 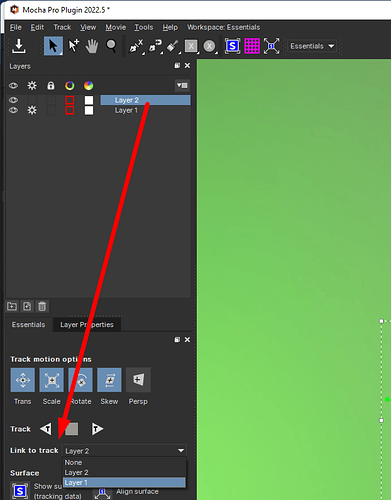