I have a shot of a person talking with a black shirt and prominent buttons on the shirt for contrast. I want to add a logo to the shirt to match the movement of the body. I am trying to use the person’s chest a tracking plane using Translation, Scale and Rotation. I have rotation because the body rotates slightly in the video. I am getting unpredictable scaling and rotation. I have tried perspective and and shear as well and the track goes all over the place. I have also tried tracking small areas and large areas, both have been unpredictable.

For fun, I tried mesh tracking and it also produced very poor results. Not sure if it’s the black shirt that is causing so many problems, but I can’t seem to get this locked in…I am using the luminance channel for tracking with large motion…

Any help would be much appreciated.

Can you upload a frame to see as a reference and what your track layer looks like?
Sometimes you need to get creative and make shapes that only focus on the areas of most texture.
Have you increased the % of pixels in the track tab?

Sometimes what would appear to be a simple track (black shirt with buttons) might be difficult for planar tracking as pure black and white means no good texture to grab.
HTH

Hi Mary and Ross thanks for your help! See attached pictures.
I was able to get the track to work pretty good in the beginning of the shot, but over time it starts to produce poor results… I also want to rotate the logo in 3D space so it follows the curvature on my chest. Since the logo is parented to the null node (which is assigned the tracking data), I turned the logos 3D space on and rotated it, is that okay to do? Or will it create an offset that doesn’t follow the track? I also tried using perspective tracking with Mocha for this shot, but there isn’t much perspective to track, as the camera is on a tripod and I’m facing the camera straight on the whole time…

I was also wondering if the mesh track could help make the logo appear more attached to the shirt. When I did a test, the track was all over the place. I’m assuming it’s because of the black shirt… I’ve only been on Mocha a few days now, and I just want to know what you think will work best based on your experience. Thank you! 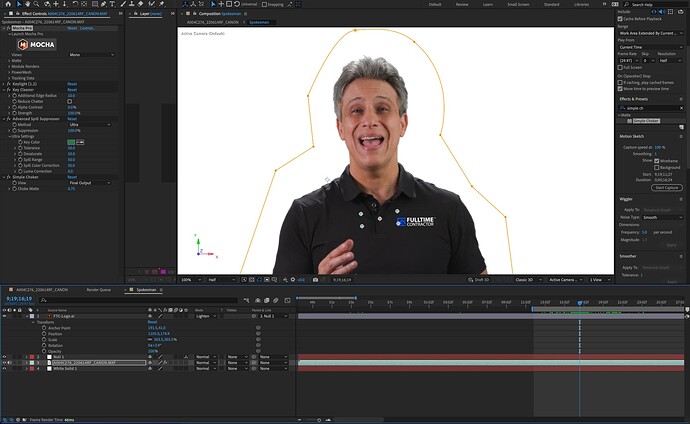 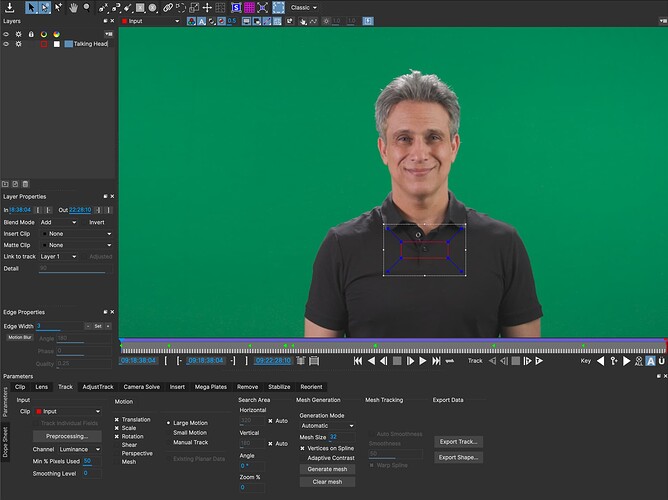 The planar surface appears to be the reason why my logo swims over time. . See Attached pictures of the planer surface movement from the start of the shot and one minute later. The first pictures is at about one minute. 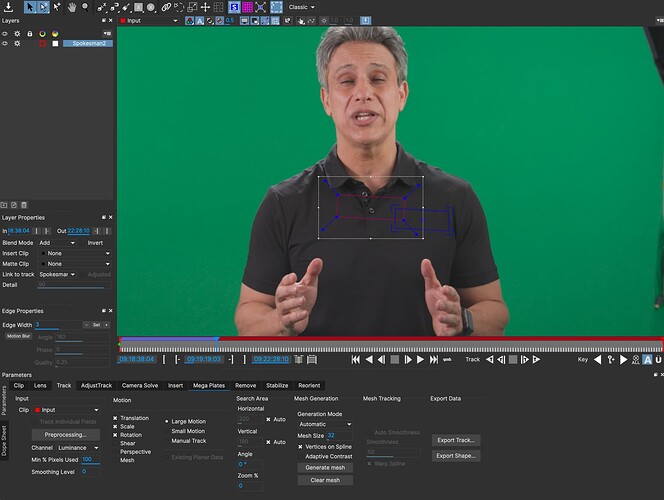 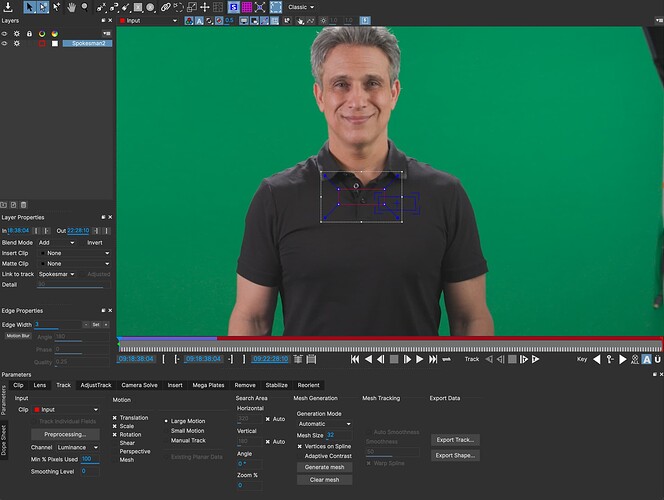 The planar surface is the track. The shape is just where the track is looking. Try tracking a larger area of chest and seeing if you get better results. Try also tracking shear or perspective when you track.

Ok, thanks for the clarification, let me try that.

@maryp initial test didn’t work well, then I tried again and it improved. I’ll have to do a complete track and get back to you. thx

Ok, it sounds like you’ll need to use adjust track to nail this shot.

Hi. I am getting unpredictable results still. This is turning into hours and hours of testing, technically this can be hand tracked faster, but that’s why I looked to Mocha to solve this type of tracking issue.

In the training it was said quick intersecting movements of the track will not disrupt the track, I have not had that experience. I put in place track mattes instead. However, it’s disrupting the track still, see the pictures. I am also not clear on why the planar surface is shifting all over the place at times when I have the track area set to the buttons on my shirt which should have enough contrast to track properly.

My other question, Is if I added a name tag on the shirt with grid lines on it, would that track properly? My only concern is how to remove the tracking markers on a shirt like this with movement in the torso so that it’s not noticeable.

I’m really getting to my wits’ end here as I even watched your video on when all goes wrong. I don’t feel that covers the kind of issues I’m experiencing here in enough detail. 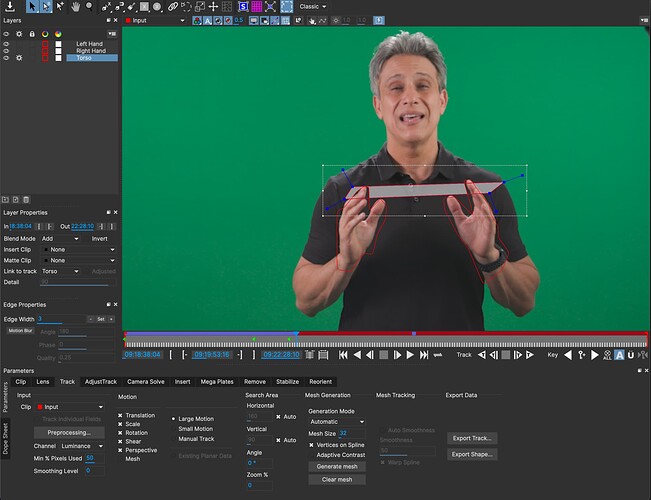 If this is a really long shot, you might have to track through really rough parts with manual track. Also, I think we need to confirm holdout mattes are working as expected. I have done some tests and think I might have found a bug. What version of Mocha are you in? I can confirm with @martinb

Here you can see another example of the track getting thrown off from the hands, even though they are set as mattes. 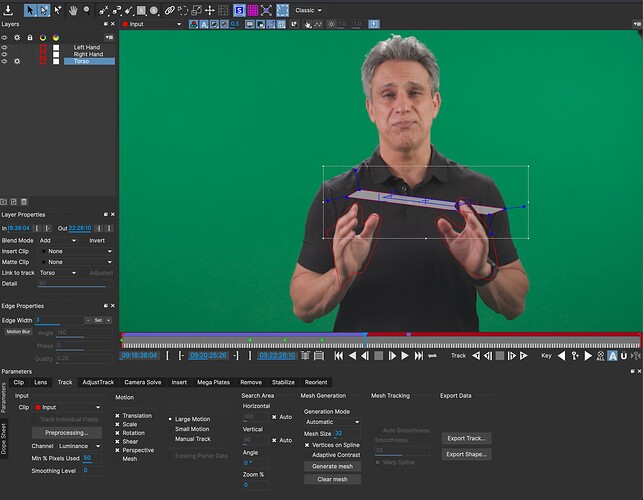 3-4 minutes with zero edits is a hugely long shot to track.

Well, the camera isn’t moving (locked shot)… The problems are occurring under 1.5 minutes into the clip. On other test, I’ve seen the problems start even earlier. What kind of edits? I have also tried manually key framing parts of the tracker on other attempts, but the end results are still not desirable. I was able to successful track points using AE motion tracker and it locked on to the buttons with no problem. I was looking to use Mocha Pro for more advanced tracking to give me perspective, etc.

It doesn’t matter if the camera is locked off, an uncut 3-4 minute clip that’s a single take is 5k+ frames to track.
This is a separate issue from holdouts not working properly for you. It’s that anything that long will drift over time.

That’s good to know. I think that should be published somewhere as a limitation of Mocha, as I haven’t experienced that with AE motion tracker. As you can see in the image, AE Motion Tracker delivered 94% Confidence. 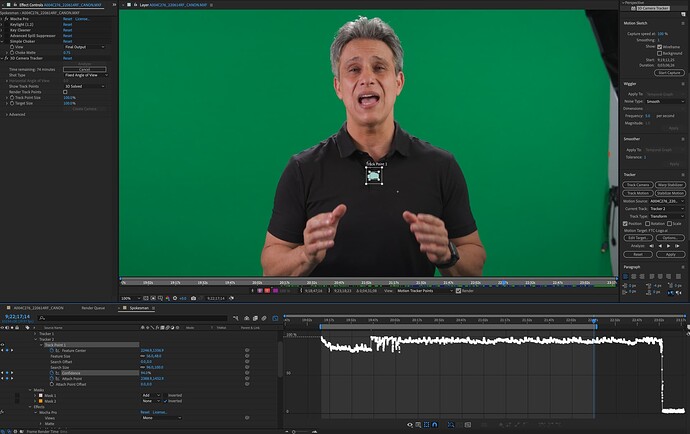 Well, if you can get your final shot to move correctly with that track, I’d use that then, absolutely.

What’s if you cut the long shot into 10-20 seconds clips and track them separately?

No I don’t think that would do it and that’s not really what I mean. Planar tracking follows a texture. This texture algorithm is really powerful but when there’s not a lot to texture and there are a lot of frames to track it’s hard to get everything to line up perfectly over time without having to do an adjust track. What you have here is a shot that is 3 to 4 minutes long, and because of that is not necessarily a great candidate for this type of work.

If a point tracker is giving you better results then you might need to use that. But I doubt you’ll get the transform data that you need in perspective.

That still doesn’t fix the main problem that I want Martin to get back to you on about occlusion holdouts not working properly.