Hi, I’m having problems with Mocha Pro inserts,
when you apply an insert the event it uses gets squished into the blue Planer Surface box

you’ve either got a choice of making that event the right size to begin with (which isn’t easy to get absolutely correct)
or/& you can adjust the size of the insert in the Insert tab at the bottom & changing the size in the Source section,
I’ve done this many many times but for some reason Vegas is crashing when applied as Render - Composite when the insert size is changed in Insert - Source,
not adjusting the insert size in Mocha back in Vegas the Render - Composite works fine,

I’ve put this on YT so i can show the best res,
6.45mins, I applied an insert twice in the vid, the preview in Vegas is Good (Half) but it doesn’t seem to make a difference what it’s set to as to whether it crashes
Youtube video - https://youtu.be/riOzQZrbERw

, so i could use Mocha Standalone to do this hiding my plate, (& render would prob be quicker

) , but that’s not the point,
I do prob suspect this is a Vegas issue tho,
Everything is up to date, Mocha Pro, Vegas, GPU drivers & Windows updates,
Thanks.

Thanks for the video @Gid.Joiner this helps.

For a quick fit, you can use “Fit surface to ROI” and it will scale the aspect ratio to the insert source ratio. then you can just place the text easier rather than fitting the surface into the license plate.
The main issue is that in Vegas, the insert image is based on the alpha of the entire project frame as opposed to a bounding box contained around the txt or image itself.

If you want to avoid this, it’s probably easier to generate an image that contains the necessary changes in the ratio of the plate you want to use, but scaled to the source ratio. This makes it much easier to work with. The alternative is to comp the plate into position in the shot, then scale the surface to the full frame of the image.

The hang however is a different problem. I suspect Vegas is trying to consolidate the cache, but we’ll need to investigate that. How long do you wait for the hang?

Thanks i’ll have a play with Fit surface to ROI, & I can add another spline mask if needed

I have quite a fast PC so when Vegas hangs it’s normally terminal, i don’t wait for long but i have left it for a while with no improvement, I’ll try it again & see

I normally use a 16:9 png image that i have already adjusted (stretched in height) so when applying to the planer surface box it fits the plate size without having to adjust the Source size, it was just in the example above i noticed that Vegas didn’t seem to like changing the size in Mocha,
I’ll keep playing with this & if you could look into it that’d be good but i can live with it as is

In this i was moving little splines here n there tracking/masking snow flakes that passed over the plate, time consuming but loving Mocha 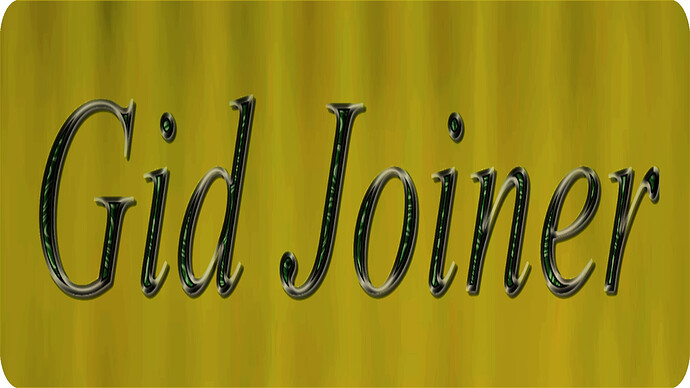 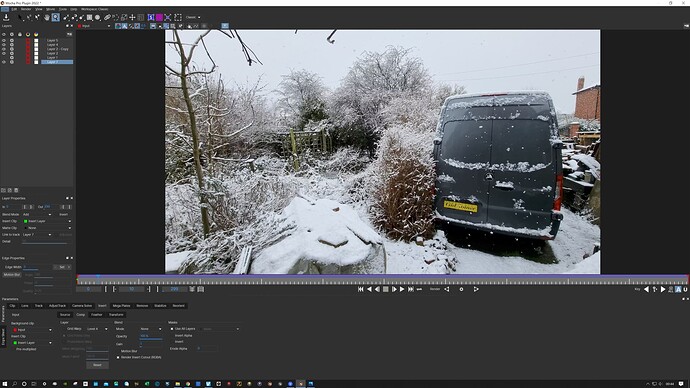 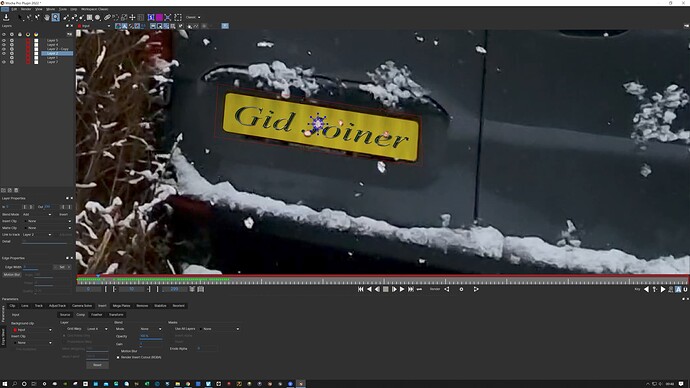 The tricky part is Vegas uses a very backward approach to most compositing, applying the source effect to the Insert layer.
I guess it makes sense in context since you’re applying a composite blend, but it’s different from how every other compositor and editor does it.

Mocha usually only takes in the source video track, so changes to the image inside the host don’t apply unless they are precomped or nested in some way. For example, the Vegas Crop/Pan doesn’t apply inside Mocha, which is quite annoying.

I’ve tried to repeat the hang on this side, but no luck yet.

@Gid.Joiner … your signature in Vegas’ forum shows that you have HitFilm Pro. Does the same problem happen there with Mocha Pro insert? If not, why not do the Mocha Pro inserts there and render out from HFP and import the renders into Vegas Pro. A lot of the compositing things I do in HFP are done with HFP as a SAL which are rendered from HFP and then imported into Vegas Pro. To be fair, I haven’t had the need as yet to use HFP for Mocha Pro effects.

For me, I use what works. I’ve been around long enough to know that not every product (e.g. an NLE) is the be-all-and-end-all for everything.

At the moment, you can link from an event on Vegas Pro’s timeline (R click the event) to access HFP, work on HFP including all its VFX, and then bring it back into Vegas Pro - not much different I believe to working with Vegas Effects in Post, but the latter doesn’t natively include Mocha HitFilm or Mocha Pro. But the next build of HFP will apparently see the end of HFP linking with Vegas Pro.

I’ll have a look to see if it’s he same in Hitfilm & VE, i suspect it will work ok

but Vegas is my main editor so that’s the one i’d like it to work & there’s always work arounds but i’m pretty sure it used to work ok in VP, can’t remember exactly because as in my pics above i make a stretched insert image to fit, (maybe it didn’t work & is the reason why i make a stretched image

)
I’ll have a go later, i bought Hitfilm just for importing my 3D OBJ CAD files, i don’t use it much but it handles the 3D files well so as you say i’ll use what works,
I bought Vegas Post after Hitfilm because the rumour is that the Vegas - Hitfilm connection will be dropped at some point,

It’s no rumour - it was stated in the HFP update notes in both the Dec 21 and Jan 22 updates (the latter only to fix a problem with the Dec update).

Hi, just to let you know i get the same with the standalone Mocha,
Track an object,
import an insert,
change size in Insert - Source,
Render - Crash

It renders fine & exports no prob if i don’t change the size of the insert in Source.

Thanks @Gid.Joiner those were the reproduction steps I needed!
I can repeat this exactly and get the crash as soon as I render after adjusting the fields. This is very much related to those fields. We’ll get someone to look at it.

Thankyou, didn’t think i’d get a reply till the morning,
I did try different setting & media for the import but that didn’t change the resulting crash,
uploaded a vid to YT just now
2min YT vid - https://youtu.be/6xkylc_OZQE

Yes. for now, I recommend NOT using the Source fields to set the Insert. Use the surface corners and transform controls instead. You should still be able to use “Fit surface to ROI” just not the other tools in that section.