Wanting to ensure my Camera Solve workflow is correct

I hope you’re well. I’m currently in the midst of trying to match move a particularly challenging shot for a client of mine in order to integrate 3D elements. I’ll typically default to the Camera Tracker in Fusion for a shot like this, but there’s a great deal of motion blur that’s interfering with a good solve. The footage is 4K and shot handheld. We follow the actor as he walks towards the edge of the cliff, he stops at the edge, and the camera tilts down to look into the valley below.

I’ve used Mocha Pro extensively for roto and planar tracks, but haven’t given the camera solver much attention. It seems like the answer to my problems, but I suspect something might be off in my workflow.

I’ve included a link to a screenshot of my Mocha window showing where I’ve placed my splines. Of note, the one on the bottom right and top right do disappear eventually as he ends up covering the right side of the frame:

Some of the trainings from Boris had mentioned having at least 2 planar surfaces, so I thought I’d be able to improve the quality with more of them and making sure they cover both sides of the frame and have them cover the different levels of parallax in the scene.

Also, there are times when Mocha loses the planar track, so in these instances I set the end point on my current spline, back up about 30 frames, and create a new spline to overlap the previous one. I’m wondering if this is part of the issue as in other shots I’ve done I’ll typically aim to have a spline track all the way through without interruption.

As a spline starts to leave the frame, I’ll animate it so it can continue to track, which I also thought was okay. I’ve also double-checked using the grid and all of the splines currently in my scene seem to maintain the perspective properly. All splines are also being tracked with at least 70% of pixels used (most often 90% or more) and perspective is turned on for all of them.

I just feel like I must be missing something. I’ve only been able to get a solve quality of 50% at most, selecting different combinations of parameters for the solve, auto included. Apologies for the lengthy post, but I hope someone can offer some guidance!

Hi Chris,
My answer might not be exactly what you want to hear…
Mocha Pro’s camera solver is not the strongest module, which is why you do not see many training videos on the subject. You should be able to get a solve better than 50% out of most shots, but the key is really about the quality of each individual planar track.

In your image the shapes overlap planes. If there is very little parallax, this can sometimes work but if the is some noticeable shift you might want to make smaller, more precise tracks that focus really on the flattest areas: 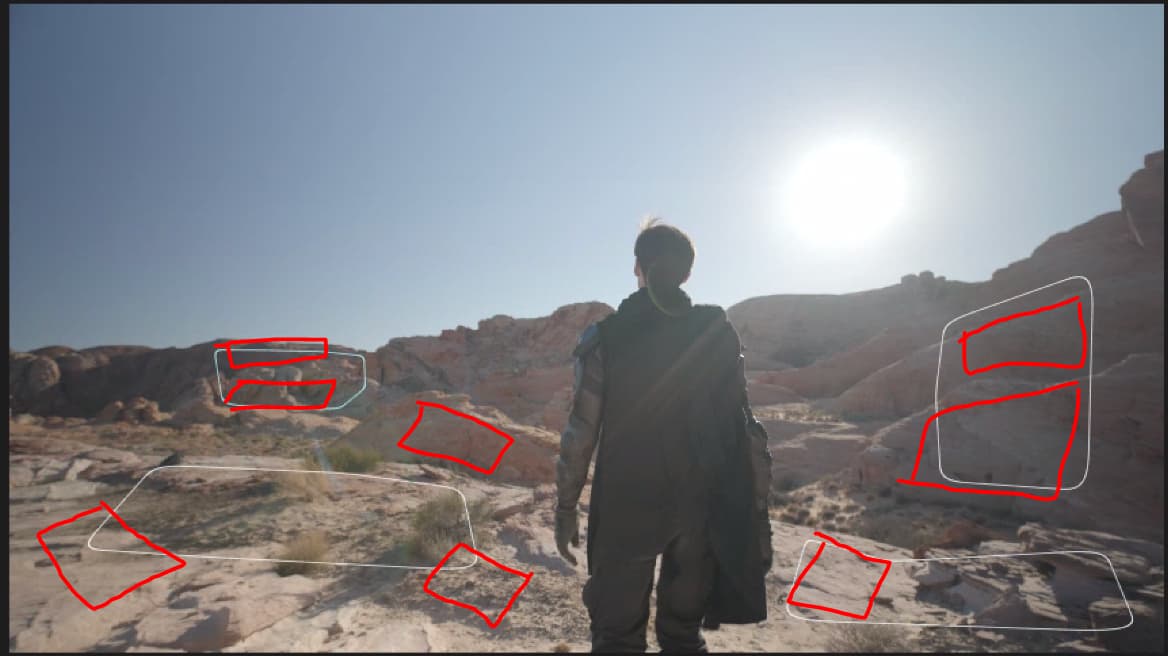 Sometimes less is planes s actually better. If the planar tracks are not solid and compete with each other, this may be why your quality is low.

Lastly, I would not use techniques like multiple shapes or animating shapes in the tracking process. Instead if a plane disappears, you might start a new planar track that overlaps the in/out of the previous layer by at least 10 frames. This is sort of like “staggered” tracks across the timeline.

If you’d like to upload the clip, I can take a look to see if I can get a better solution.

Last tip. If you can indeed get decent planar tracks on some of the surfaces, but the Mocha solve is still wonky… an old-school technique I used to use: render some 2D perspective grids on top of the shot and then send that back to your camera tracker of choice. This was how we used to use Mocha to assist 3D camera trackers many years ago.

The Mocha dev team is aware that “a better 3D camera solver” is a highly requested feature from the user base.

Last tip. If you can indeed get decent planar tracks on some of the surfaces, but the Mocha solve is still wonky… an old-school technique I used to use: render some 2D perspective grids on top of the shot and then send that back to your camera tracker of choice. This was how we used to use Mocha to assist 3D camera trackers many years ago.

I suspect this might end up being the way. I can’t believe I hadn’t thought of using Mocha in that way, but it makes a ton of sense. I’m going to give this a go first. Thank you thank you so very much!

You quite literally saved this project. I cannot express enough thanks! This is why I love Boris FX. Mocha always saves the day.

Hey Chris, that is great to hear. It is really useful when people take the time to follow up on the forums.
We’d love to see the final before/after if you get a chance.

Sure thing! I’d be happy to share a demonstration of how Mocha was able to lend a hand. The final comp is still quite a ways off. We’ll be adding a destroyed ship in the valley as well as replacing the sun with a sun being gobbled by a black hole. So getting a good solve for the sun and for the valley were both top priority.

This clip was more or less a perfect storm of being difficult to match move. The handheld nature of the footage meant a ton of motion blur and very abrupt movement. I also ended up needing to battle with a lens flare that at times took up almost the entire left half of the frame. I was able to address all of this by strategically tracking areas of the footage and inserting a grid of crosses, which you can see popping in and out in the video.

Ultimately, prior to adding Mocha to the mix, I was lucky to get a solve error with Fusion’s camera tracker of under 50. After tracking in the grids, the final solve error we ended up rolling with was 0.61. Absolutely night and day. The other benefit is because I placed a grid in the valley, I was able to get very solid reference for where to place my 3D objects with the resulting point cloud. This solution couldn’t have possibly worked better!

Cool - thanks for sharing. BTW - I watched some of your YT tutorials. Great stuff! Would love to talk offline about you doing some guest Mocha tuts.

That sounds great! Absolutely. If you want you can feel free to email me at hello@swataramedia.com. I’d love to chat!